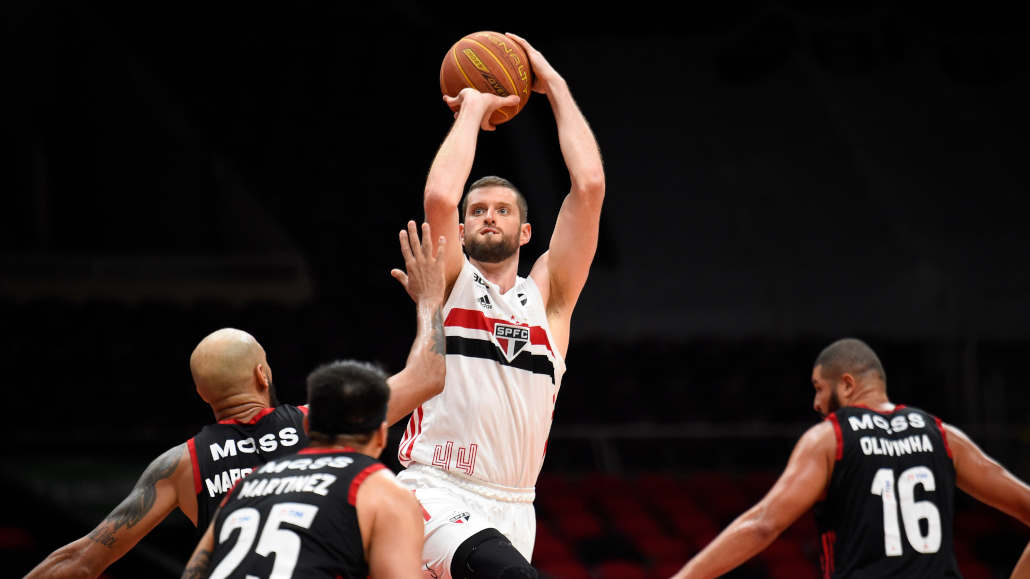 Basketball is one of the most exciting sports. Its fast-paced nature and unique rules make it a treat to watch. It also comes with some complex rules that can significantly impact the length of each game.

If you want to find out more about how long basketball games are under different competition formats, we’ve got the guide for you.

We’ll cover international, NBA, and college rules to help you better understand how long a basketball game lasts under each one.

How Long Are Basketball Games?

There’s no universal answer to the question, “how long does a basketball game last?” This is because different basketball associations have different rules.

To make sure we cover every important rule down to the tiniest detail, we’ll answer this question through the lens of FIBA, NBA, and NCAA rules. Let’s get into each one:

How Long Are FIBA Games?

Naturally, the most significant factor that impacts the overall length of a basketball game is the playing time.

When it comes to FIBA competitions, the playing time is divided into four quarters, each lasting ten minutes. Additionally, if the game is tied, there’s an extra five-minute overtime period.

Excluding this period, every regular time FIBA game lasts 40 minutes, plus the 15-minute halftime break after the second quarter.

When all is accounted for, an average FIBA game lasts around two hours. This can be extended by additional overtime periods, with each overtime lasting five minutes.

How Long Are NBA Games?

NBA games generally last longer than FIBA and NCAA games, primarily because the regular period of every game lasts 48 minutes instead of the 40 minutes you’ll find in the other two competitions. 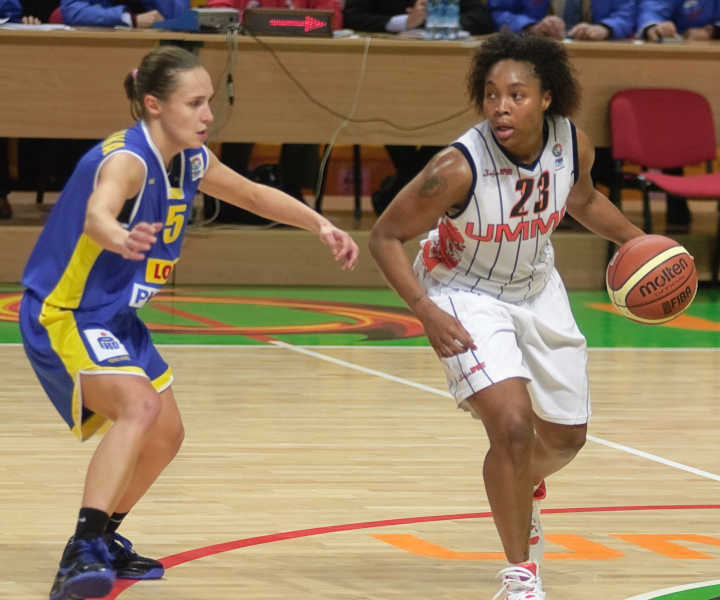 The four periods are distributed equally into four twelve-minute quarters, with a short break between each quarter and the fifteen-minute halftime break.

Typically, NBA games last around two and a half hours. Each overtime lasts five minutes.

Additionally, it’s worth mentioning that the WNBA games use a ten-minute quarter format instead of the twelve-minute one used in the NBA.

This means that a WNBA game takes roughly fifteen to thirty minutes less to finish than an average NBA game. The overtime remains the same five minutes as in all other professional basketball competitions.

How Long Do NCAA Games Last?

However, women’s NCAA basketball games have a format more similar to the international FIBA game format.

Games are played in four ten-minute quarters with a short break between each quarter and one fifteen-minute break after the second quarter.

Both men’s and women’s NCAA basketball games last approximately two hours on average. There’s the same five-minute overtime rule as in the NBA, WNBA, and FIBA.

The Importance of the Shot Clock On Game Length

The basketball shot clock is certainly one of the essential elements of the sport, as it has a significant impact on how the game is played.

In simple words, the shot clock is the amount of time a team has to complete an offensive set.

The NBA added the shot clock in April 1954. Before this invention, players would take several minutes to carry out their offensive plans, and the games would often end with teams only scoring a couple of dozen points.

This wasn’t very interesting to watch, so the shot clock was introduced to make the games more fast-paced and interesting.

There are a few crucial rules to remember about how the shot clock works. The first and most important one is the duration. This can vary depending on the competition, but there are a few uniform values. 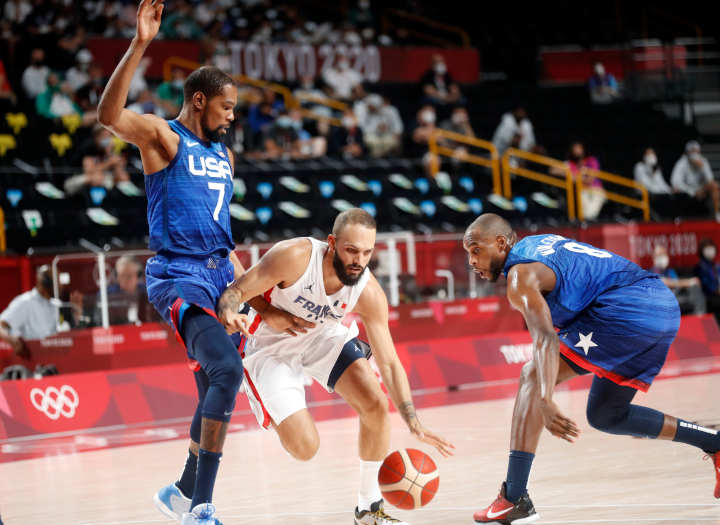 The shot clock is restarted every time a team gains full possession of the ball.

Additionally, if the players don’t complete their offensive plan or lose the ball in the process, they commit a shot clock violation. In this case, the other team gets the next possession automatically.

Moreover, when shooting the ball, the player must release it before the shot clock runs out. So, if the clock sounds while there’s still contact between the hand and the ball, it’s a shot clock violation.

You should also know that the shot clock can be stopped depending on the situation on the court. The rules for this are fairly straightforward and easy to remember.

These are the general rules regarding the shot clock, although there might be some variations depending on the specific competition.

For example, in NBA games, the referee also stops the shot clock during the last minute of the first three quarters after a field goal is made.

Moreover, the shot clock also stops in the last two minutes of the fourth quarter and overtime after a player makes a basket.

As you’ve noticed through previous sections, the specific league format has a big impact on how long the game will last.

Moreover, timeouts also affect the overall game length, as every time anyone calls a timeout, the clock stops.

In each basketball association and league, both sides have a predetermined number of timeouts they can use during the game.

Teams can use these timeouts to draft game plans, make substitutions, or get a quick rest before the next important play. Here’s how timeout rules differ between FIBA, NBA, and NCAA games:

Teams playing in FIBA competitions can take two timeouts during the first half, three timeouts during the second half, and one additional timeout in case there’s overtime. Each timeout lasts one minute, and unused timeouts can’t be carried over between periods. 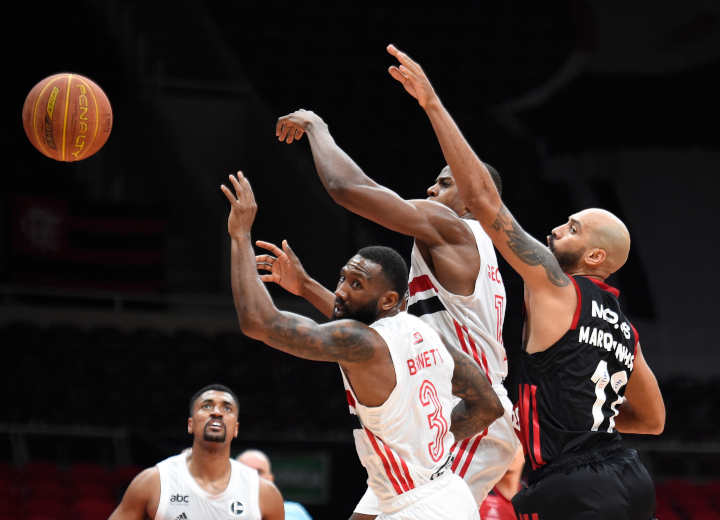 Additionally, each team receives one timeout for every overtime period played.

The Length of Basketball Games – Summing It Up

When there are so many factors in play, it’s impossible to tell exactly how long is a basketball game.

That said, a simple rule of thumb is to remember that the higher the stakes, the longer the game is likely to take.

Given that the clock can be stopped an unlimited number of times and that both teams can take a varying number of timeouts, you could potentially spend a lot more time at the venue or in front of your screen than you initially planned.

And, the last thing you want to do is miss out on the end of the game, as that’s most often the most exciting part, especially when the result comes down to the wire. 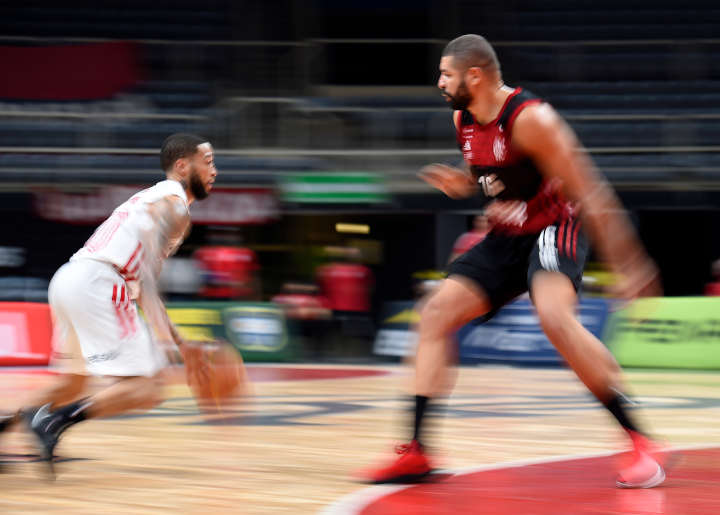 The best way to look at this is to set aside at least two to two and a half hours. In big playoff matches or finals games, this can even span to close to three hours.

Although basketball is undoubtedly a time-consuming sport to watch, it’s also one of the most entertaining ones.

Knowing how long a basketball game might take can be confusing at first. But, hopefully, this detailed page has helped you understand and calculate how long a game will take in every situation.

What’s the longest basketball game ever?

According to the Guinness World Records book, the longest game ever was an NBA game played between the Indianapolis Olympians and the Rochester Royals in Rochester on January 6th, 1951. This game lasted for 78 minutes and included six overtime periods.

How long does an average basketball game last?

There’s no direct answer to this, as it depends on the league the game is played in. Moreover, the game’s length depends on the number of timeouts, clock stoppages, replay reviews, shooting fouls and free throws, and many other factors.

So, a basketball game can last anywhere from two to three hours.

How long is a basketball quarter?

We’ve covered this in more detail in the guide above, but if you’ve jumped straight to the FAQ section, here’s a brief summary.

Are there free throw time limits in basketball?

Yes, every player has ten seconds to shoot their free throw. It’s one of the less-known basketball rules that can impact the game’s overall length.

This rule is in place to speed up the game and prevent needless time-wasting from players who would otherwise take too much time at the free-throw line.

This rule is particularly crucial in high-stakes games with a lot of fouls. When many players are going to the line, especially in the last quarter, the ten-second free throw rule ensures the game doesn’t last longer than it needs to.

High school basketball games usually use a system of four quarters, each lasting eight minutes, plus a ten-minute halftime break.

This means that high school basketball games are generally shorter than professional games, with games lasting between an hour and a half and two hours.